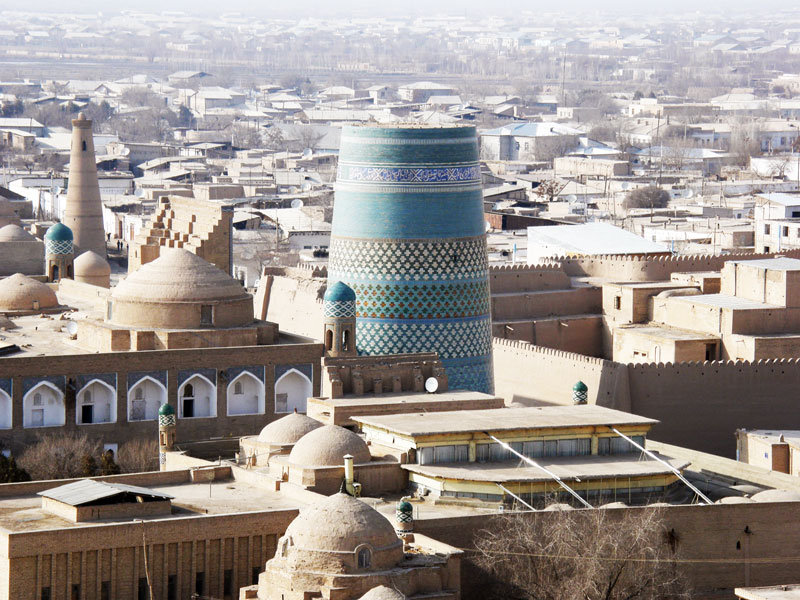 "Khorezm is one of the places of secular science, unique culture, elegant art, high education, philosophy of life and philanthropy of human life, literature and ...

The historical and cultural heritage of the Khorezm oasis is directly related to Khiva. "

One of the world's oldest cities, Khiva, which is considered to be one of the international tourism centers, has not been recognized as an open-air museum. More than 122 archaeological monuments and architectural monuments dating back to the 6th - 5th centuries BC up until the 20th century were preserved and protected by the State.

Especially the Ichan-Kala part of Khiva is a monumental monument preserved in Central Asia, its fate and architectural monuments are closely linked with the historical and cultural development of the world's oldest cultural heritage - Khorezm .

Khiva is a creative endeavor to the art and work of Khorezm architects, inheriting the centuries-old architectural traditions of Khorezm, the cradle of ancient cultures of the Orient.

On December 12, 1990, the city of Khiva was the first in Central Asia to be "World Heritage Site" by a special resolution of 14 sessions of UNESCO in Canada. The celebration of the 2,500th anniversary of Bukhara and Khiva, the two largest and largest cities of Uzbekistan in the world under the auspices of UNESCO in 1997, testifies to the recognition of these cities globally.

Khiva, one of the oldest museums in Uzbekistan, is a historical architectural state museum-garde of 26 hectares. It is surrounded by old walls of Ichan-Qala to

Historical and architectural monuments of 54 mosques and 2600 inhabitants in 360 houses.

On April 27, 1920 Khiva was established as a state museum. From 1924 to 1967, the Khorezm Museum of History of the Revolution, the first in Central Asia in 1967, began to function as a real historical architectural museum.

14 independent exhibits in the 69 halls of the museum-reserve reveal the period of Khorezm and Khiva's history and contribute to its contribution to the world culture.

The age of the city was determined by the Academy of Sciences of Uzbekistan during the 1984-1993 academic year. The result of archaeological excavations in Khiva indicates that the Ichan-Kala area dates back to the fifteenth century AD. The objects found in the lower reaches of the city (ceramic tiles and thick walls) show that. The cultural layer, ceramics, and large amounts of bricks found beneath the city walls confirm that the city is 2500 years old.