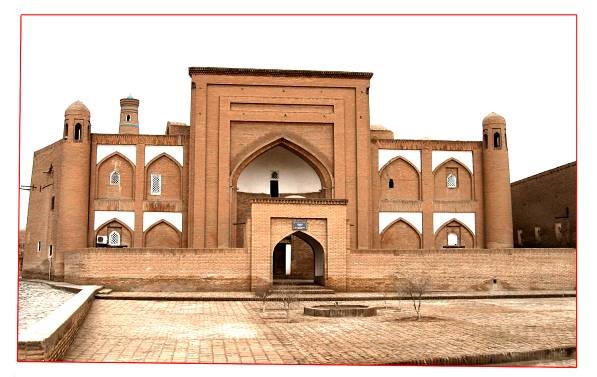 This madrasah is located to the west of Muhammad Amin Inaq Madrasah. Initially there was a small carcass-type madrasah built by a famous Khiva woman. Arab Muhammad Khan bought this madrasah from this woman together with the adjacent land and in 1616 built a new one-storey madrasah of baked bricks to commemorate the fact of Khiva becoming the capital of Khorezm instead of Kuya Urgench. As the building became dilapidated, in 1838 during the reign of Allah Kuli Khan it was reconstructed in the manner typical for late Khiva madrasahs. Presently it is a one-yard, two-storey symmetric building. The main entrance is marked by a strict portal. Cylinder-shaped guldasta towers with arched lanterns are erected at the corners. The winter hall of the mosque is in the north-western corner while the summer mosque is at the longitudinal axis facing the yard.