Heritage of the past 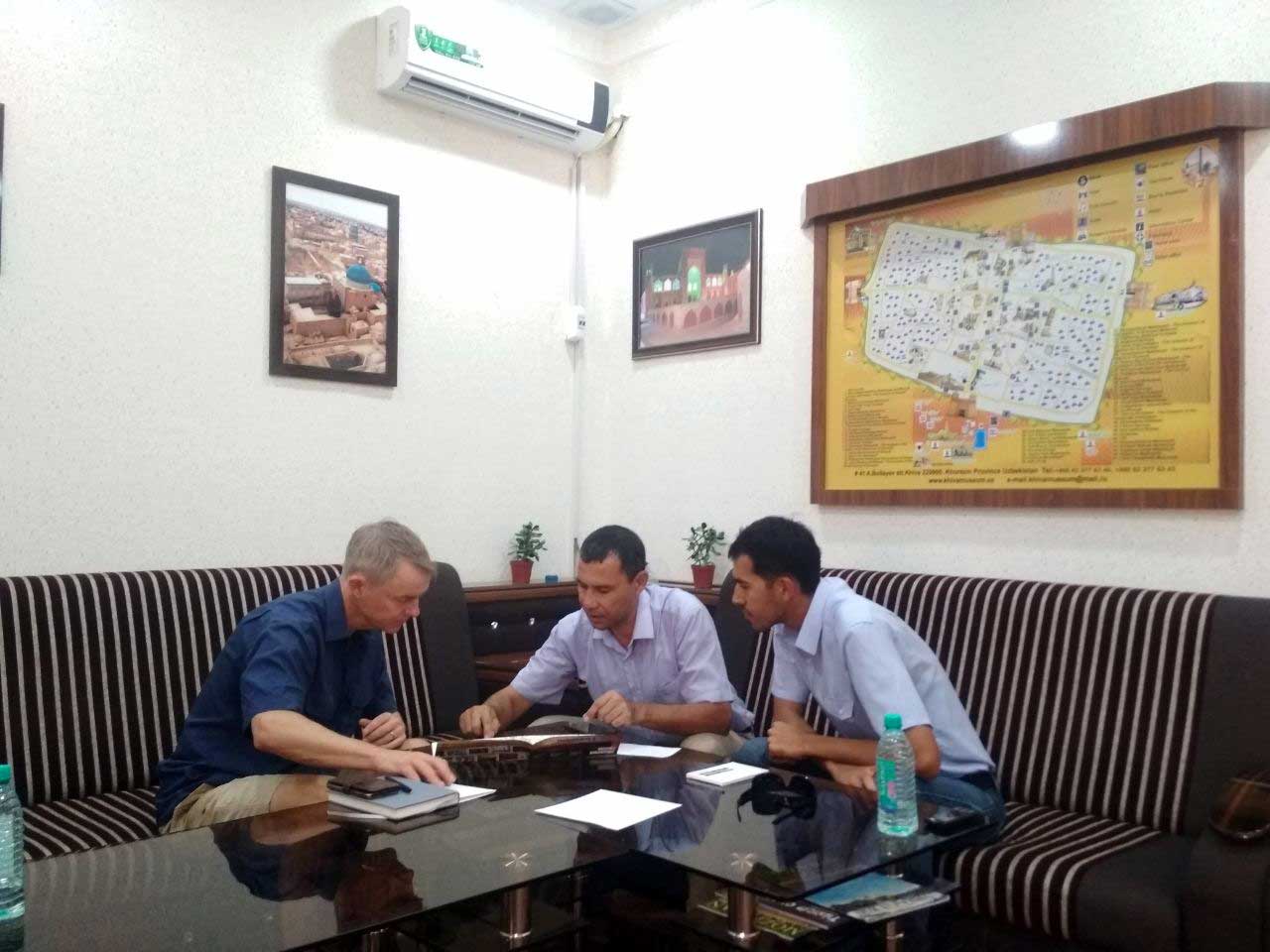 On 19 of august in “Ichan-Qala” state reserve museum arrived Mr. MichealFrej from Sweden Architect Committee. We had a friendly talk about the historical objects of Khiva “IchanQala” city. Mr.Frej got an interview for an article about monuments and the connection of them with islam religion. Not all know that any historical object in our city is tied with Islamic culture, and one of the flow of Islam “sufizm” and it is ideology. In the conversation took participation mr.MaqsudAbdurasulov deputy director of “IchanQala” state reserve museum on marketingand investment arrangement affairs, mr.Frej and I (PolatovFarrukh, guide-interpreter).
We gave information to mr.Frej about the history of buildings and islam religion. I believe that we had got an interesting talk about everything.
The religion Islam, climate and belief of people have an effect on architecture of historical buildings: Madrassas, mausoleums, mosques, minarets, and simple houses with “ayvan” (open terrace) – with a high ceiling for a good air circulation of high and low strata of the society. Architectural design and culture: domes, crescent, star, arches, clay walls, minting, trimming works like patterns (carved) on the wall, on wood, on marbles and stones are the traces of above mentioned factors. In the past ourancestors hit upon building centralized underground sewage systems, water supply systems like “havuz” (pool) - with portable water outside near the main gates of “IchanQala”, inside the yards “quyu” (well) – with portable water of any buildings in Shahristan. “Yap” (channel)-digged out channels for irrigating the planted lands passes through the Khiva city and it is very smart of ancestors.
As a proof of my words, I can say that dome is a symbol of the world on earth, minaret was the way to heaven (on sufizm ideology), spiral stair upward was a symbol of stage way to Allah in the sufizm ideology as well, floral patterns of walls were also the symbol of love to allah insufizm ideology. Clay walls come from the climate of oasis.Horseshoe shaped arches of portal and windows are huge and impressive, horse-shoe was a symbol of holiness for muslim nations.
Our interesting talk made happy mr.Frej and we discussed about museum partnership in future. We showed to mr.Frej our incredible museums and innovative news which have been executed in “IchanQala”. Then we finished ourmeeting hoping that we will have a chance to make a partnership in future as we wanted.