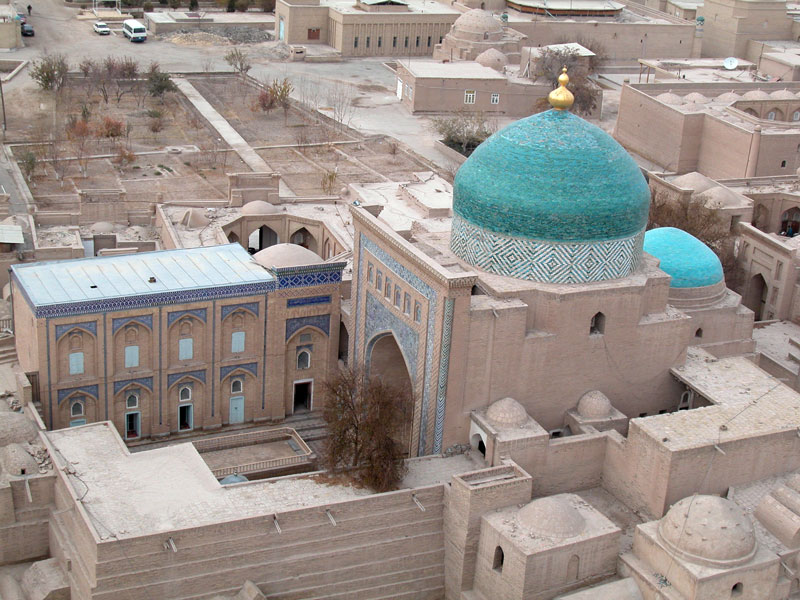 The mausoleum of Pakhlavan Mahmud  was built in the 14th century, in the form of small barracks, where the body of the great "Piri" Pakhlavan Mahmud  (1247-1326) was buried. Pakhlavan Mahmud  was born in 1247 in Khiva, a family of craftsmen. In his youth, the father practiced hip storming, then wrote letters and gained a great philosopher's degree in philosophy. He is a very brave giant, and has never touched any of his 79 years of life.

Many stories about Pakhlavan Mahmud  have been preserved. One of them: Once upon a time there was a waterless steppes in Khiva. After the collapse of the ancient Urgench, after the invasion of Mongols, its inhabitants spread all over the country. The mother of Pakhlavan Mahmud , who was pregnant as a result of her pregnancy, came to Khiva and gave birth to a son in the village of Qiyot. This boy is known as a brave giant, 15 years old, a famous giant. He overcame a mighty king of a far country. The king was astonished at the power of the Hivalik gigant and said to him, "Ask what you need". Pakhlavan Mahmud replied to the king, "Give me one of our cows who have slaughtered a bull over a bull." The king agreed, and ordered that the ox bearded. Pakhlavan Mahmud  cut off the thin strips of skin and put them together and took a long belt and took people back to Khiva and settled people there in the village of Shikhs outside the city. So far, most of the rural population The truth is that during the pre-revolutionary period, the villagers were in the service of Pakhlavan Mahmud  mausoleum.

This legend demonstrates how brilliant and brilliant man Pakhlavan Mahmud  was. He is known as the "Khorezm khayyomi" in his time as an intelligent and philosopher of science, a great talent and intelligent person. It's not without reason. According to researchers, Pakhlavan Mahmud  is not only a clever narrator of both the poetry and the philosophy of Umar Khayyam but also the Persian poet after Khayyam in the literature of Turkic peoples. Even the great poets, such as Abdurahman Jami, Navoi, Fuzuli, and Bobur, have tried their strength in ruboiy, this genre is in the 2 nd place in their creativity. The philosophical and artistic ideas were developed in the centuries ago, raising the geography to a high level.

Pakhlavan Mahmud  occupies a special place in Oriental literature. Pakhlavan Mahmud  was later honored as "Khorezm Hayyomi" and "Mazandaran Tiger". He was a "Kitholite", a ghost of which he was nicknamed "Kanz ul-haqayiq", "The Treasury of Truth, 1303-04y", but has not been found yet. See her hearty, gentle and playful, excellent artistic ruby ​​tales in the spirit of "Hayyamnovna".

The reader of such lines also perceives the human emotions of the poet's outlook. Pakhlavan Mahmud  of the pantheon of the pantheism is a highly valued man.

Tukhtasin Jalolov, who has made numerous services in the restoration of the historical biography of Pakhlavan Mahmud , wrote his unique rubabs for publication: "It should be noted that the period of the poet's birth was the most severe of the history of Khorezm in the 10 years following the bloody campaign of Genghis Khan a great poet who was born in a time when he had suffered terrible disasters and had suffered a terrible heap of wounds, is a manifestation of the fact that the heart of the great poet was born as a wave of sea waves.

According to the poet 's request, the body was buried in his lizard workshop. His versatile practical and creative activity was so great that after a long time after the death of the poet, he was among the great saints and the tomb was a place of pilgrimage. The mausoleum of Pakhlavan Mahmud  has been renovated by many great masters over time.

In historical sources, the gate was built by Amir Temur. The existence of the grave of Abulgazihon, Anushakhan and Arangkhan in the mausoleum shows that during the reigns the tomb of the poet was well-preserved. During the years of 1701-1702 the monument of Shodiyozhan in Khiva was rebuilt, and from this time the gate to the entrance to the mausoleum remained. From the inscriptions on the door, it is known that the Qur'an, the hadith and the poetry are decorated with dates, turquoise, madakhil and other Islamic flowers. Here is a piece of the inscription:

"This illuminating building was built by King Niyaz Khan in 1702, and the well was buried in the same place. Mastermind Nadir Muhammad ".

The current mausoleum was erected after the successful ride in Kungrad in 1810 by Mohammed Rakhimhon-I (1806-1825) and was completed during the reign of his son Vallakulihan. The mausoleum consists of 3 parts. Cemetery, Hanaqo and Corridor. Pahlavon Mahmud is buried in the western part of the tomb. Near the northern wall of the monument there is the grave of Mohammed Rakhimhman, with his grave tombstones Abulgazihon and Anushakhan. Allakulikhan was buried in the corridor. At the end of the XIX century, the area around the Tomb of Pahlavan Mahmud was converted into a burial ground where Khiva khans and their relatives were buried. The building was managed by the master of the Hazarasp master, Odinamuhammad Murad, who mastered the masterful small-scale objects (mysterious tiles) with a unique architectural structure, decorated with ornamental patterns, the outer dome, and the roof part, while the interior of the room was plastered. By 1825 Olloquikhon (1825-1842) ordered a gravestone, a visitor to the temple and a circus ornament. At the same time, the dome of the visitor and graveyard were covered with blue green gray bricks. Some tombstones have been replaced with new mosaic tiles.

The front of a room in a dome-covered room is brought in five-sided form, and Olloquulkhan's saga is here. Room walls were covered with decorative mystic tiles and a copper grille was installed. Among the hivalik masters, Mulla Nurmukhammad wala-Kalandar uulu, Sufimuhammad Niyaz Usta-Abdujabbor uglu and Master Abdul-jinn were able to show their rare art. In addition to the masterpieces of the genius (25 meters high), the masters of the pearl are in the Persian language, written by Pakhlavon Mahmud, the 22 rupiahs, the names of the masters, the hadiths and the history. In addition, the poet's ruble is written in the Persian language at the entrance to the gate:

In the western part of the mausoleum in 1910-1913, the mother of Khiva Isfandiyhan (1910-1918) built a two-bedroom cottage for her and her son and a four-room flat. The construction work was supervised by Kurbanniyaz, with a colonnade with a pillared tombs.

Pakhlavan Mahmud  Complex In 1960, the master Ruzmat Masharipov, with the participation of Ruzmatov, was buried in the mausoleum over the dome, the tomb and the tent. At present, the Spiritual Administration of Muslims in Uzbekistan, Pakhlavan Mahmud  Foundation, is operating in the building.

Because of the renovation of some of the buildings, in 2007, the pavilions, corridors, wells and wooden dome with beautiful furniture and some of the mysterious tiles of the roof were rebuilt. 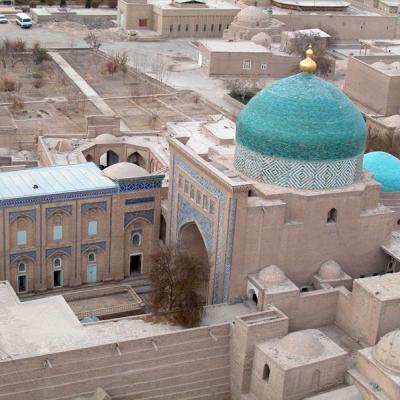 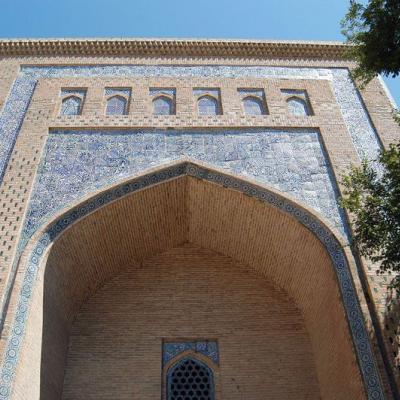 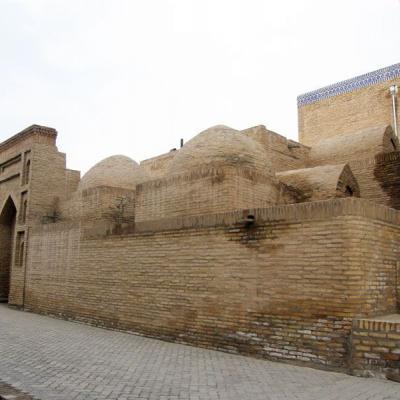 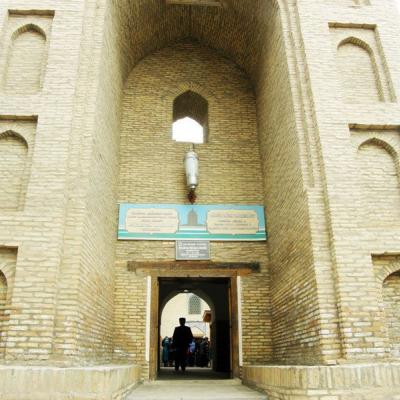 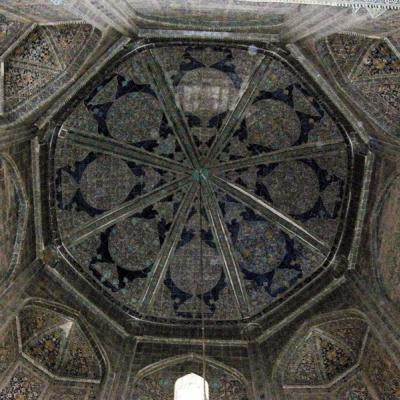 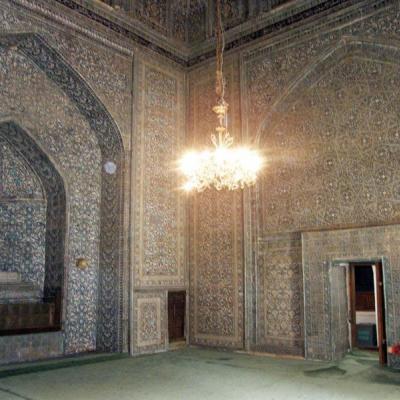 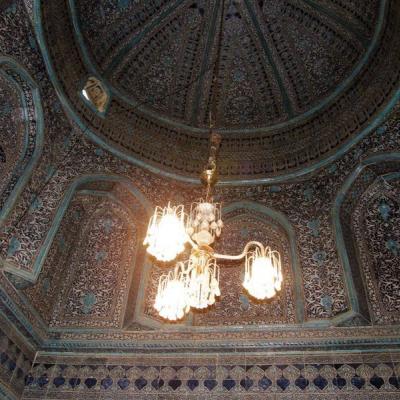 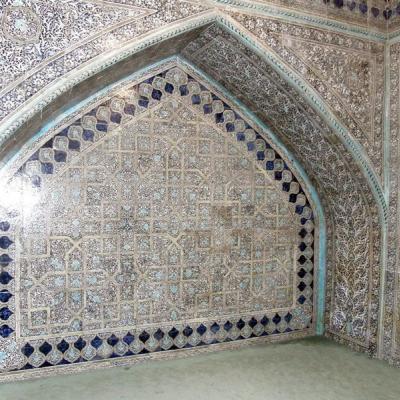 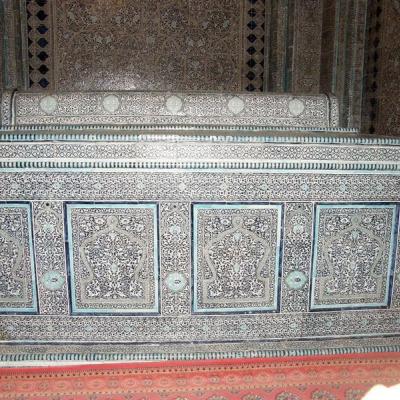 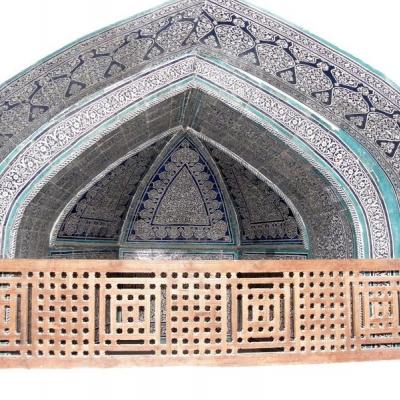 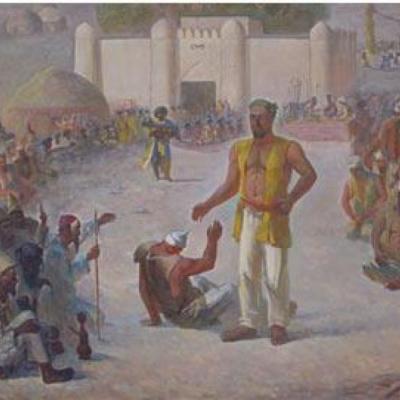 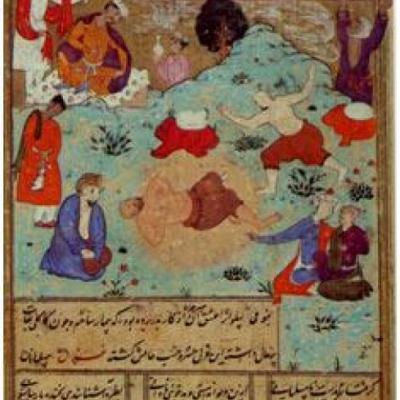 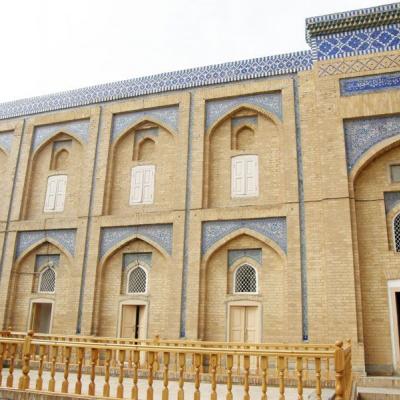 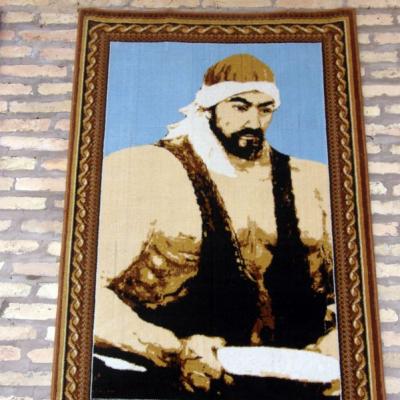 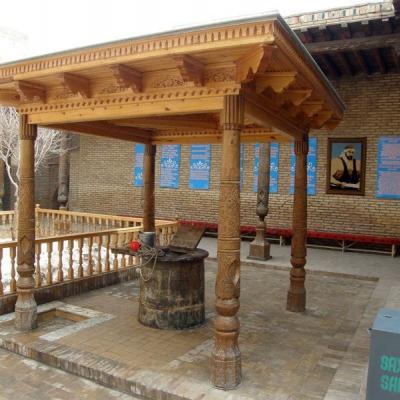