Palauer historian Hudoyberdi ibn Karkuhammad Hivaqi, who wrote the stories of the past on the history page, wrote in his poem "The language is awesome": "Heavenly times have been destroyed and rebuilt His Holiness (Alloquy) The city was erected by Abulgazi Muhammad Rahimhon and his brother Qutlug Murod-unok, with their efforts to build a large madrasa (Qutluq Murat Atak Madrasa 1812) and a large domed mausoleum (Pahlavon Mahmud mausoleum 1810-1825) he writes.

According to the inscriptions, madrassa-mausoleum was erected and decorated in 1804-1812 by the uncle of Khiva's khan Olloqulihan Kungrad, commander of the military commander Qutlug Murad Anak. The medresse was constructed as two-storey building with 81 apartments and 24,634 tanks, and a small dining room and a mosque, and a special well inside the tributary sardoba, which residents drank from that well. Khiva masters, who built the first two-storeyed madrasa in the newly constructed city, have tried to follow the example of certain copies.

The craftsmen built the madrasah as the basis for the construction of the most beautiful mosque in Bukhara, Abdulazizkhon. In order to save money, architects have made it easier for the medresseh to create summer terraces, two large chambers in the wing, and ordinary cabinets instead. The Khiva craftsmen have made some improvements in the old style and decorated the yards in the courtyard. There is a summer mosque in the eastern basement of the madrasah and there is a wooden upper floor at the top of the mosque at the height of the second floor. The elements of innovation are evident in their composition; the north and south elevations are broader than the western and eastern hills, and the masters have shown the yard in this way. Unlike the castle built in the early centuries in Khiva, the façade is quite splendid. This result was achieved thanks to the fact that the roof of the roof was made of five-sided columns and rugs and a large number of decorations. The rugs are surrounded by colorful mosaic tiles, and mosaics are covered with madrasas, and the samples of the bouquet of rosemary inside the roof give it a smile. Although all this has slightly changed the look of the building, the holes and windows allow the dome-shaped bouquets, which limit the two facets of the main facade, to be seen as a fortified building. If the masters aspire to introduce a novelty in the work of the exterior facades, we will not notice it inside.

Even the mosque and the classroom are extremely simple and decorated with no ornamental patterns and simple patterns in the dome of the myona dome and in the dome of the summer mosque. The gates of the madrasah and the inside mosque and the carved doors of the school are remarkable. Each door is a great example of a gem wood carving. The other rooms of the madrassa are composed of dome domes with almost the same shape as the right square. The cell is illuminated by the grid door at the top of the door. The cells also have a van and a sofa, and some floors are made of half a dozen wooden floors.

According to legends, Murad insisted that Anak be buried in the footsteps of his own madrassah. It is forbidden to enter the city from the dead outside the city, according to the rules of that time. But they did it well. The fortress wall collapsed in front of the madrassah, which was later opened by a madrasa, buried through the corridor and buried under the gate of the madrasah, and the fortress wall was restored. But according to some estimates, the corpse may be placed in the kitchen on the left side of the madrassah, as it is said in the middle: "There is no hacking of a bone."

The madrasa for its own time is a great science school, and the following information about its activities has been preserved: - The date of the 1275th Journey, the Sabbath (September 13, 1858) The medresseh's foundation received 1880 botman grains and distributed as follows: "The poor are given 50 batmans (" Khiva batman "20 kg), 180 blankets, 50 boots per barracks, 30 barrels per barber, two readers 324 batmans, muazzin and mosque imams are divided between 130 batman and 1160 batman students, of which 616 students from 21 boats and 18 students from 10.5 batman , total of 191 batman, and 255 batamians from 5 boats to the undergraduate students (48 of them).

As it can be seen from this document, in 1858, 95 students in this madrassah gave them 2 lectures. In addition, the madrassa had a shrine and hairdressing barbershop, a mujtahid (madrasa chief), imam, azânchi (muazzin), and his students. The vast area of ​​Medrese and its surroundings are smaller markets. The Taliban graduating from Madrasah have passed the exam. To do this, the khan made a "special jury", which included the khan himself, often the governor, the judge, the judge, and many scholars. Students who successfully passed the exam are Mufti, Alem, Okund. inevitable (madrassa book). Among the graduating students are poets, mummers, writers, scholars, and scholars.

At this madrassa, Korakolpoq poet Berdaq studied poet Avaz Otar, a scientist and writer. At present, craftsmen are working in the yard of the madrassa and they enjoy the products they work with.

The madrassah was renovated and devoted to the 18th anniversary of the independence of our country. 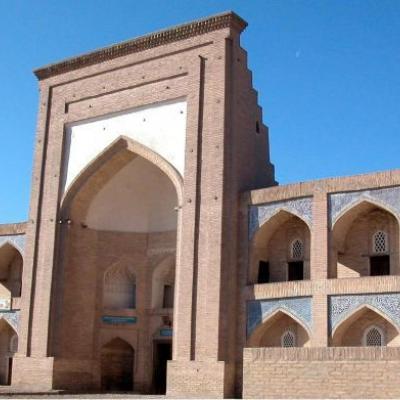 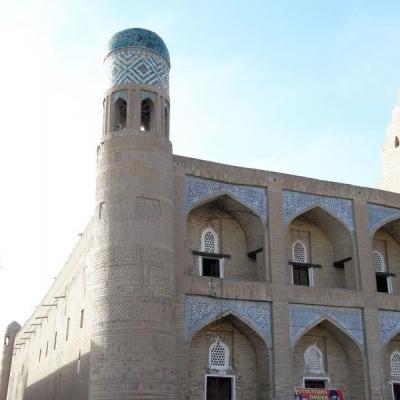 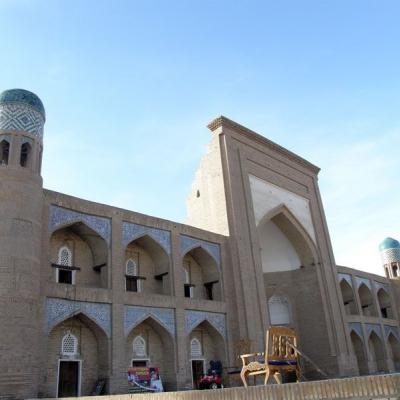 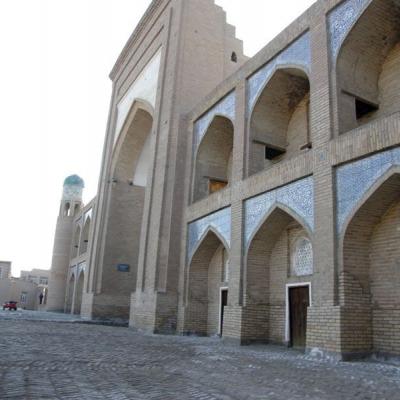