Visit of the President of the Republic of Uzbekistan Shavkat Mirziyoev to Khorezm. 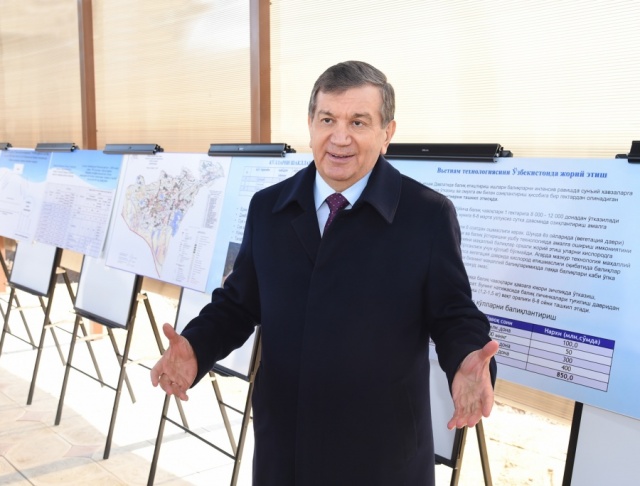 President of the Republic of Uzbekistan Shavkat Mirziyoyev visited the Khorezm region on January 27 to get acquainted with the progress of social and economic reforms, creative and landscaping in the area.

The gradual development of the country has changed a lot in the Khorezm region. Large-scale construction works and promising investment projects have been implemented in the city and districts. Within the framework of the industrial potential development program of the Khorezm region for 2013-2015, 432 industrial enterprises were established, approved by the decree of President Islam Karimov on November 22, 2012.

November 11, 2016 Shavkat Mirziyoyev held a pre-election meeting in the Chovotsky region with all the regions of the country to continue the modernization of the economy of the Khorezm region, agriculture, textiles, medicine, tourism, art and others. specific development plans.

The visit of the head of our state to the Khorezm region was devoted to the issues of how these plans were implemented and the issues of raising the region's development to a new level.

The President's visit to the region began with the Ichan-Kala complex in Khiva.

The Ichan-Kala Museum-Reserve combines history, culture, science, ancient architecture and the skill of our people. Being a valuable asset of mankind, it is included in the UNESCO World Heritage List. The museum has 38 561 exhibits. In 2016, about 75,000 people, including 34,000 tourists from 84 countries, arrived in Ichan-Kala.

There are many such historical monuments and sights in Khorezm. Tourism is growing steadily in the region due to modern requirements and creating the necessary conditions for tourists. In 2016, the export of foreign tourists increased by 20 percent compared with 2013.

The decree of the head of our state "On measures to ensure the dynamic development of the tourism industry of the Republic of Uzbekistan" of December 2, 2016 created tremendous opportunities in this regard.

The mausoleum of Pakhlavon Mahmud was visited.

The head of our state got acquainted with the reconstruction of the Memorial House of Isfandiarhon and the palace complex of Nurillaboy in the historical part of Khiva, in the Madyus Madyuz Devanbegi.

President Islam Karimov stressed the need to make full use of the tourist potential of Khorezm, create new routes and promote them on world markets, develop hotels and transport infrastructure. In fact, tourism is one of the most important spheres of the country's economic development, especially in creating new jobs.

From the Urgench-Khiva railroad and the construction of a modern station in Khiva, high-speed trains and the Afrosiob high-speed train should be built on this route. To increase the attractiveness of the city, the city was instructed to organize street chaise lounges, organize excursions and demonstrate their national traditions and entertainment.

Speaking to entrepreneurs in the field of tourism, he spoke about expanding international cooperation in attracting foreign tourists, improving the quality of service, training and retraining of qualified specialists, as well as expanding souvenirs. Requests were provided to sector officials.